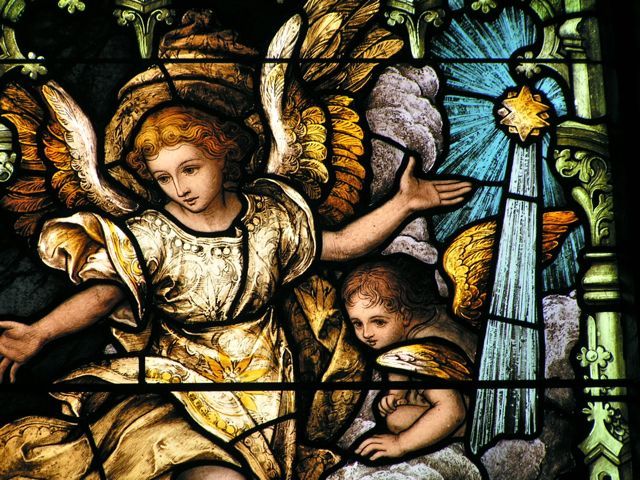 Have you ever spent two hours in a dark movie theater, and come outside into the bright sunlight? When people are in the dark for some time, their eyes adjust and become used to the warm, friendly darkness. And, being in a movie theater can also transport people into a whole new world. Then, when the movie is over and they step into the real world, into sudden bright daylight, the stark difference in dark and light can be a shock to the system, can’t it?

That was a little what it was like for the shepherds, so long ago on the hills at night around Bethlehem. Not too far from Jerusalem, only eight or ten miles down the road. That was a much different time, and much different place. Electric light had never even been heard of! Sure, after night fell and the sun disappeared under the horizon, people had candles and oil lamps. Although, those were expensive. If people did not have much money to spare, they simply went to bed with the sun, and woke the next morning when the sun rose.

Our Gospel writer Luke tells us that “There were shepherds living out in the fields nearby, keeping watch over their flocks at night.”  I am certain the shepherds had some kind of night vision, especially if there was some moon shining and a clear night. I suspect they had grown comfortable with the darkness, keeping watch over their flocks by night.

I wonder whether anyone here can remember back to a time when they were outside at night, far, far away from the city lights and civilization? Perhaps, far north in Wisconsin or Michigan? Or, maybe in the mountains of Colorado? Then, you might be familiar with that kind of night vision, being aware of all kinds of things happening around you in the dark.

Except – these shepherds had no understanding whatsoever about bright lights! I mean, like spotlights, flood lights, lighting up the whole sky! Suddenly, “An angel of the Lord appeared to them, and the glory of the Lord shone around them, and they were terrified.” What on earth – or, outside of the earth – was this sudden appearance of the angel?

Some people in the 21st century probably are so accustomed to the Christmas story that their idea of shepherds keeping watch over their flocks by night is somehow associated with Christmas cards. But, it was life as usual for these working people. An everyday way of life in Palestine. What’s more, being a shepherd was not a particularly high class job. The lowly vocation of shepherd was on the outskirts of society. A possible comparison today is to think of a person selling “Streetwise,” the paper sold for $2.00 outside of grocery stores, drug stores and coffee shops here around the Chicago area.

And suddenly, the angel of the Lord came to these shepherds—came to people in homeless shelters, people selling “Streetwise,” people down on their luck, people on the edge, on the outs of society. The angel of the Lord came to them with good news. Good news. Lighting up the sky in a way the shepherds had never seen before. We can see God breaking through, in an unexpected way, to an unexpected group of people.

The message of God’s Good News certainly did not come to the people we might expect. Are they influential members of the community? Rich movers and shakers? Leaders of the local synagogues and teachers of the Law of Moses? Those would be the kinds of people who I might expect to have an angel sent to them. But God doesn’t work that way. Again, God does the unexpected, and chooses the most unlikely people to receive a hand-delivered angelic message from the Lord of Hosts, the King of Kings.

One of my favorite commentators, Carolyn Brown, is a retired Children’s Ministry educator and writer. It is her confirmed opinion that children and families need “To hear the story read or told in an important way on the ‘night it happened’ – Children like hearing the story of their birth on their birthday and celebrating other big events on ‘the very day it happened.’  So, the story which may have been acted out in a pageant and discussed in church school and read at home, feels more ‘real’ when read [at Christmas time] in the sanctuary.” [1]

Last Friday, I was so pleased to be able to welcome the families of the preschoolers here for their holiday program. The highlight of the program was a visit from Santa. Since there are children from such a variety of faith traditions at the preschool, and since this is a preschool that gets help and funding from the state of Illinois, they need to be careful not to make it all about Jesus. It’s fun to think about Santa, but how do we here in the church deal with the tales and legends about Santa?

As Carolyn Brown reminds us, “If Santa is all there is to Christmas Eve once children learn ‘the truth’ [about Santa], Christmas is just a greedy gift grab.  But, if Christmas Eve has always circled around the story of Jesus told in the sanctuary, the truth about Santa can be fit into that context and the Christmas celebration gets richer.” [2]

We can tell our children, our grandchildren, about the bright light seen by the shepherds. We can tell how the angels came to bring the shepherds the Good News that the Baby born in Bethlehem is indeed Emmanuel, God with us. Jesus is the Light of the world, God born into this world as a Baby.

(I would like to thank illustratedministry.com for their Advent devotional “An Illustrated Advent for Families: In Light & Darkness.” For this sermon, I have borrowed several ideas and quotes from Week 2 of this devotional. Thanks so much!)

Worshiping with Children, Christmas Eve/Day, Including children in the congregation’s worship, using the Revised Common Lectionary, Carolyn C. Brown, 2013. Why Children Need to Get To Church on Christmas Eve/Christmas Day.

(Suggestion: visit me at my regular blog for 2019: matterofprayer: A Year of Everyday Prayers. #PursuePEACE – and my other blog,  A Year of Being Kind . Thanks!