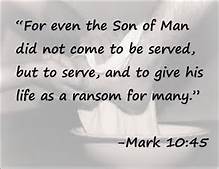 Almost everyone is familiar with slogans and jingles. I could say, “You deserve a break today, so get up and get away to…”  What about “I am stuck on Band Aids, ‘cause Band Aid’s stuck on me.” Or, “It’s the most original soft drink ever in the whole wide world—Dr Pepper.” When I mention these jingles, you can almost see the product right in front of you. That is how vivid the slogan or jingle from Madison Avenue is. This advertising hook is planted deeply in many people’s brains and memories.

I am not going to mention any political party in this sermon, but currently, one political party today uses a slogan that bring images to many people’s minds today. (Either strongly positive, or strongly negative.) It is “Make America Great Again.” Again, a lot of people have vivid, strong ideas or thoughts about this slogan. Similar to the advertising jingles I just mentioned, “Make America Great Again” strikes deep in people’s brains and memories.

Greatness. What is greatness? Who is the greatest? That’s the argument among the disciples in the Gospel reading for today. I suspect that argument resonated deeply in their hearts and minds, too. The disciples all had a basic idea in their heads of what “the greatest” was supposed to look like, act like, speak like, and be like.

Our reading is from Mark 10, just a few verses before the beginning of chapter 11, where Jesus enters Jerusalem on Palm Sunday for the final week of His life. This is the very end of Rabbi Jesus’s three-year ministry. His disciples had been with Him, and learned from Him for three whole years. And, still, after all this time, the disciples are still bickering over who is going to be “the greatest” among them. How clueless, how thick can they possibly be?

James and John, two of the disciples closest to Jesus, have the presumption to march right up to their Rabbi and ask Him something outrageous, straight out. In the Gospel of Matthew, same question, except Matthew softens it a little by having the mother of James and John ask.

The question? “We want You to do for us whatever we ask of You.” Talk about a self-centered and self-serving request! But, don’t we say almost the same thing to God, sometimes? Some of us might be looking in the mirror when we look closely at this reading.

“In our modern world in this twenty-first century, we still repeat the identical demand to God: ‘Lord God, we want you to do for us whatever we ask.’ And then we ask God for our own way, what we want, e.g. healing for ourselves, our loved ones, a good job, a good spouse, a good house, a miracle of some sort, a special blessing, a way ‘out of a jam.’” [1] (In other words, some say prayers to a vending-machine-in-the-sky-God, or foxhole prayers said when things look really black, and there is no hope left.)

James and John wanted to be great! Whatever “great” meant to them. Oh, we know what “great” means to many people. Lots of power and control! Lots of people running, fetching, carrying for you! Being “great” meant lording it over everyone else, over all the little people. After all, James and John had a pretty good idea that their Rabbi was soon going to be proclaimed the Messiah. After all, hadn’t He told them so? Hadn’t Jesus been displaying the signs and miracles of His Messiahship for the past three years? Wasn’t that why Jesus was going to Jerusalem? As Messiah, they thought Jesus would become an earthly King. So, He would need right-hand guys to be His lieutenants. They figured they were those guys.

What is the matter? This picture does not jive with Jesus, that’s what.

Everyone else was pinning their hopes on Jesus, hoping that He would overthrow the Roman armies of occupation and restore the earthly kingdom of Israel. Then, everything would be hunky-dory, as far as the Jewish people were concerned. However, Jesus had no desire to become an earthly king, with an earthly kingdom, like King David.

People just did not understand. Not even when Jesus explained to the disciples that they needed to become completely of no account, like children, they still did not have any idea of what Jesus was talking about.

What is the overarching disconnect and problem here? “Power has been the perennial problem in human history. The reality of power is complex; its use and misuse in all human, social and political relations and interactions has been a question of utmost importance for all peoples.” [2]

Here, in this 10th chapter of Mark, Jesus clearly outlined His path and direction several times. Then, how did James and John get so mixed up, so close to the end of Jesus’s ministry? When people get focused on the wrong direction, they can end up in a very different place from where they started.

Listen again to Jesus’s words: “You know that those who are regarded as rulers of the Gentiles lord it over them, and their high officials exercise authority over them. 43 Not so with you. Instead, whoever wants to become great among you must be your servant, 44 and whoever wants to be first must be slave of all.”  I’d like everyone to notice: Jesus calls His friends to serve others. That is how they are to lead.

Jesus does not slam ambition and striving. Jesus does not call us to be Godly doormats, or worms under other people’s feet. He did not mean for us to be so heavenly-minded that we are of no earthly good or of no earthly use to others. In this passage, Jesus redirects our efforts of leadership. Our servant Savior teaches that true success requires a servant heart, and a servant practice.

Can you think of humble, thoughtful people who were chosen to lead, rather than those who proudly grasped for power?  Lording it over the people they lead? I can think of several who are particularly proud, high and mighty, looking down their noses at the “little people.”

Remember, Jesus said of His friends, “Can they drink the same “cup” of suffering and death he must drink, a cup that he himself will later ask be removed if possible? (14:36) Can they be baptized with the same baptism Jesus is to endure?” [3] Challenging words of Jesus, indeed.

Again, would we accuse Jesus of seeking for authority, status, honor, glory, or power? I think not. As followers of Christ, He modeled for us the style of leadership He wants us to use. We need to serve each other in love, not rule with a rod of iron or blunt force.

In Jesus’s day, all roads were dirt roads. People wore sandals. Whenever they went anywhere, people arrived with dirty feet. A household servant would show hospitality by washing guests’ feet. When Jesus and His friends were having dinner, there was no servant available to wash anyone’s feet. I leave us all with the vivid image of the Rabbi Jesus with a towel and basin. He’s a loving servant in the Upper Room at that Passover Seder, washing feet.

[2] “Minjung and Power: A Biblical and Theological Perspective on Doularchy (Servanthood),” Kim Yong-Bock, at Religion OnLine.

(Suggestion: visit me at my regular blog for 2018: matterofprayer: A Year of Everyday Prayers. #PursuePEACE – and my other blog,  A Year of Being Kind . Thanks!