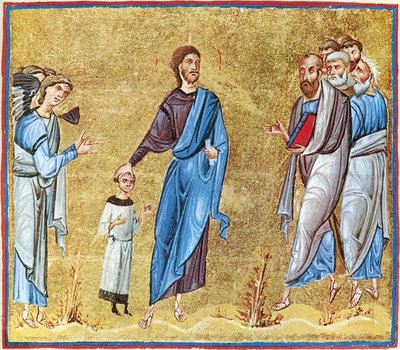 Just before the Gospel reading for today, Jesus and the disciples are walking on the road to Capernaum. The disciples have an argument: they are bickering over which one of them is the greatest—the “best” disciple. One problem: they tried their hardest to have this argument privately, without their Rabbi Jesus hearing about it.

Of course, we all know what really happened. Jesus knew about the argument anyhow. Except, He acted like He didn’t, and asked a leading question: “When Jesus was in the house, He asked them, ‘What were you arguing about on the road?’”

I suspect you are all familiar with the reaction of a small child when he or she has been found out, and is guilty of something. Perhaps breaking a glass, or spilling some milk, or something even a little more serious. The guilty look, the sidelong glance, the trembling lips, ducking the head. Even a few tears. There is embarrassment, even feeling ashamed. We all know the signs. We’ve all been there. The response from the disciples? “34 But they kept quiet because on the way they had argued about who was the greatest.”

Who is the greatest, anyway? Jesus tells us, in His usual puzzling, even roundabout way. With a seeming paradox, no less.

Jesus sits down. That’s important! Did you know that teachers and scholars in the first century would always sit when teaching? Our Gospel writer Mark wanted to make that clear, so that’s why he mentioned Jesus sitting down—going into teaching mode.

We already know the disciples were confused about a lot of things. This was another of those things. Just before this reading, Jesus reminds them about His death and how important it would be. Immediately after that, almost as if Jesus had never mentioned such a serious thing at all, the disciples start to bicker about which one of them is the greatest. Imagine! We always knew the disciples were pretty clueless. As if we needed another reminder.

Next, Jesus did something quite unorthodox. (As was His habit, after all.) Jesus brings a little child front and center, right into the middle of His teaching session.

Sometimes, when children are brought to the front of some churches, it’s because “they’re so cute!” With pretty little outfits, and darling, chubby cheeks. Often, children act silly or say the darnedest things!

As one commentator says, “However, during the rest of the sermon, are the children central? Are they models of faith? Or are they there just for the giggle and cute factor?

Jesus very distinctly does not say, ‘I love these cute little guys. Isn’t this kid so adorable?’” [1] That is not the purpose at all.

Just to make sure we all understand just how unorthodox this was, we need to know the position of children in the first century. Children were not considered persons, yet. They were considered helpless and marginalized in that society. Isn’t that what Jesus always did? Didn’t He go straight for the helpless, the marginalized, the outcasts, the least of these? That is what He did, in this situation.

Bound up in this spotlight on a small child is Jesus’s statement about who is truly “the greatest” in God’s eyes. Remember, Jesus is still in teaching mode. He states that “the kingdom of God was based on a completely different set of principles. God’s kingdom ushers in a new world order…. [This] radically reverses normative standards and declares a different definition of discipleship—service to others. The one who is willing to be last of all and servant of all is, in fact, great in God’s kingdom.” [2]

What does this definition of greatness mean to you and me? Jesus’s definition is completely counter-cultural, whether we are talking about the culture of the first century or of the twenty-first. This does not mesh at all with any modern idea of “the best” or “the greatest” or ribbons or trophies or Olympic medals. However, Jesus does not concern Himself with adjusting or accommodating to other people’s standards. Instead, He “calls us to imagine that true greatness lies in service by taking care of those who are most vulnerable – those with little influence or power, those the culture is most likely to ignore.” [3]

Isn’t that Jesus, all over? Isn’t that what Jesus would do? He wouldn’t hang out with the cool kids on the playground, or with the rich folks on the right side of the tracks. Instead, Jesus would seek out the lepers, the tax collectors, the Samaritan woman by the well, the blind and the lame and the demonized ones. Those most vulnerable, those with little influence or power.

As we consider our church, St. Luke’s Church, and our children, we can follow the excellent example of many African American congregations. Overwhelmingly, they have “reached out to children in love. This spirit has deep roots within African American history and culture. Now, more than ever, vulnerable children need to be embraced by the church just as Jesus embraced children.” [4]

That’s what Jesus did. Listen to our reading: “Taking the child in His arms, Jesus said to them, 37 ‘Whoever welcomes one of these little children in My name welcomes Me; and whoever welcomes Me does not welcome Me but the one who sent Me.’”

Jesus reached out to the margins of His society and drew a small child into the center of His community. What is more, He welcomed the child. He welcomed the least of these and integrated them into our fellowship. Can we do any less?

It’s not only the children, but also the other people on the margins, on the outskirts of society today. The outcasts, the lonely, those who are stigmatized or separated. We need to welcome all of these, the least of these. No matter what. Just as Jesus welcomes the children fully into our fellowship today.

Who would Jesus welcome? He welcomes you. He welcomes me. Praise God, Jesus has His arms open wide to welcome everyone.

Children in the Center of the Assembly, Clint Schnekloth, The Hardest Question, 2012.

(Suggestion: visit me at my regular blog for 2018: matterofprayer: A Year of Everyday Prayers. #PursuePEACE – and my other blog,  A Year of Being Kind . Thanks!)