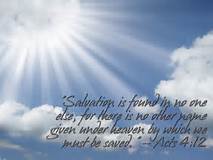 “How many of you remember a time when you were so excited about something that you could barely wait to share that news with another person? Maybe it was getting accepted to the university you dreamed of attending? Or maybe it was that you are finally pregnant after years of waiting? Or maybe it was that you have now been confirmed to be cancer free after lengthy treatment? Or maybe it was when your special someone asked you to marry him? Or maybe you got the job you so desperately hoped for? This exciting news is changing your life, and you want to shout it from the mountaintop!” [1]

With exciting news of that magnitude of importance, who wouldn’t want to share something so earthshaking that is turning your life upside down?

That’s the case here in Acts chapters 3 and 4, where Peter and John are in Jerusalem, telling people about the Messiah Yeshua, the risen Jesus, risen from the dead. Do you know? Have you heard? This news is so exciting that it’s changing my life! Anyway, that is the story that Peter, John, and the rest of the disciples are sharing in downtown Jerusalem at the beginning of Acts 4.

But then, there’s a hitch. A problem, a complication.  Reading from Acts 4:1-2, “The priests and the captain of the temple guard and the Sadducees came up to Peter and John while they were speaking to the people. 2 They were greatly disturbed because the apostles were teaching the people, proclaiming in Jesus the resurrection of the dead.” In fact, these religious leaders are so upset, they toss Peter and John in prison.

There must be something behind this God-sent boldness that energizes so many people!

“Solus Christus,” or “By Christ Alone” is another one of the foundational principles that sets Protestants apart. Another of the rallying cries of the Reformation, this important principle means Jesus Christ alone is the mediator between God and humanity. Not the priests as mediator between us and God, and not the sacrifices in the Temple as a necessary covering to allow us to come to God, but salvation comes through Jesus Christ alone.

Certain other faith traditions put extra emphasis on the saints, or the Virgin Mary, or on the church hierarchy. Yes, these ought to be honored. Absolutely we have the saints and Mary the mother of Jesus as our blessed examples and those we hold up as special before God. Plus, as the apostle Paul and Doctor Luke tell us repeatedly in the New Testament, we are all called saints of God, so we are all examples for one another.

Back to our passage from Acts 4. What happened to Peter and John? “5 The next day the rulers, the elders and the teachers of the law met in Jerusalem. 7 They had Peter and John brought before them and began to question them: “By what power or what name did you do this?”

The religious leaders of Israel had thought they had gotten rid of their problem some weeks ago when they had a rabble-rousing rabbi called Jesus crucified. But, no! More and more problems kept cropping up, ever since they had “misplaced” this rabbi’s body, and then there were some scattered reports of Him being raised from the dead, being alive again.

The religious leaders brought Peter and John before them, and asked point blank: “By what power or what name did you do this?”
What is the foundational principle for Peter and John? Just as Acts 4:12 tells us, “Salvation is found in no one else, for there is no other name under heaven given to mankind by which we must be saved.”

What is another way of saying this great Good News? “The message of Jesus entails “salvation” (soteria) — a divine reality that generates wholeness, restoration, and reversal of societal norms (“healed” in Acts 4:9 is literally “saved,” sesotai)” [2]

We can say for sure that Peter, John and the other disciples would absolutely agree with the Reformers: “Solus Christus,” or “By Christ Alone” are we saved.

That was one principle that Protestants were willing to die for, and did.

What about you? What about me? Are we willing to proclaim Christ? Why does Peter say it so clearly? Because he has been with Jesus. So, too, we are with Jesus. “By Christ Alone” we are saved, we are restored, and we are walking by His side.

(Suggestion: visit me at my regular blog for 2017: matterofprayer: A Year of Everyday Prayers. #PursuePEACE – and my other blog,  A Year of Being Kind . Thanks!)