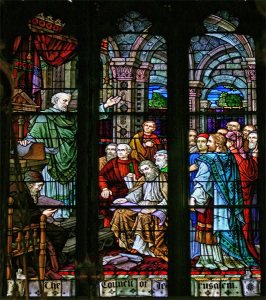 I hate to make sweeping statements, but I definitely think that that is one everyone can agree upon. Conflict resolution is never an easy thing.

We could be talking about the rough and tumble of sibling rivalry: “Mom! He started it!” “Did not!” “Yes, you did, too!” Or, a difficulty between neighbors that might get worse and worse, and escalate out of control until someone puts up a spite fence. Or, what about a problem between two employees in the workplace? You know the sort of thing. A disagreement starts between two people. Words are exchanged. Each side is sure they are right! Next thing you know, the whole office has chosen sides, and is squared off against each other.

We have a situation very much like this, in Acts 15. The whole group of believers—in all of the congregations scattered around the Mediterranean by this point—has escalated to the point that we heard about today, during the New Testament reading.

To recap, back in Acts 2, a number of days after our Lord Jesus ascended in to heaven, the few dozen believers have a Pentecost experience! The Holy Spirit comes upon them all, and Peter preaches his remarkable sermon. Not remarkable in and of itself, but remarkable because of the incredible response he got. Hundreds and hundreds of people came to belief in the risen Lord Jesus, in just one day! These were all Jewish believers. And, they continue spreading the Good News to any Jew they encounter. Many more believe, too.

Then, in Acts 8, Philip preaches in Samaria. The Holy Spirit comes upon these half-Jews, and even more people believe in the Good News! The circle of belief and faith continues to become wider and wider. In Acts 10, Peter preaches the Gospel to a Gentile—Roman centurion named Cornelius, and his whole Gentile household. They all believe, too! And, the Holy Spirit comes upon all of them, as well. Peter and the other apostles have the witness of their own eyes. They see that “God shows no partiality, but in every nation anyone who fears God and does what is right is acceptable to Him.” (Acts 10:34b-35)

The Holy Spirit continues to move. The believers continue to preach the Good News to anyone and everyone. It doesn’t matter whether they are Jew or Gentile, slave or free, high class or low born, or any other distinction. All are welcome to come to faith in the risen Lord Jesus.

Which brings us to the beginning of Acts chapter 15. A large number of believers has squared off, one side against the other, over keeping the Jewish laws. Should we, or shouldn’t we? What about Jewish people who never really kept kosher, before they started believing in the risen Jesus? Should they keep 600-plus rules in the Jewish law, now? And what about Gentiles who might have never had any idea about the Jewish laws, before? Should they turn themselves inside out and start keeping kosher, and wearing special clothes, and observing special holidays?

I went to one of the textbooks I had for one of my seminary classes, called Church Administration. (One of the best classes I ever had, in all my years of school!) This book is called Never Call Them Jerks: Healthy Responses to Difficult Behavior by Arthur Boers. Such helpful material on church conflict in this book!

Our situation at the beginning of Acts 15 seems black-and-white. We can see that from verse 5: ‘Then some of the believers who belonged to the party of the Pharisees stood up and said, “The Gentiles must be circumcised and required to keep the law of Moses.”’ We have group A (or, Aleph) on this side, yelling ‘You’ve got to keep Jewish Law!” and group B (or, Bet) on the other side yelling back, “No, we don’t!” As they continue to bicker and snarl at each other, the argument gets worse and worse!

This argument is a classic case of polarizing! “Reducing issues to ‘black-and-white’ solutions and giving little time to discovering other options.” [1] What will they do now?

Yes, the controversy has busted wide open. Sometimes, people get stuck. They either don’t or can’t move. There they are, in that big, black-and-white argument, no way out. Or, so they think.

At the church council in Jerusalem, there was some discussion. I don’t know how long the discussion went on. There may have been some name-calling, or possibly even getting into fist fights. (I don’t know for sure—this was before the days of reality television.) Adversarial comments could have happened! “using ‘we/they’ language and ignoring or dismissing what is held in common.“ As the argument escalated, I can imagine threatening ultimatums being issued, back and forth. [2]

Here’s an illustration Boers uses: “One snowy morning I drove the high school car pool. I backed my fully loaded van onto a downwardly sloped street. On the slippery pavement, the van would not budge uphill in a forward gear. I could have pushed the accelerator, spun the wheels harder and faster, and gotten nowhere. Instead, I backed partway down the hill, tried the forward gear again, discovered my wheels had found a purchase, and was able to move forward.” [3]

Similarly, we find the apostle Peter taking a step back. Just like the van in this illustration, he backs up. And, he “seeks the common good over the interests of particular parties.” [4] He tries to find some common ground that all can agree on. Peter says, “God, who knows the heart, showed that He accepted the Gentiles by giving the Holy Spirit to them, just as God did to us. 9 He did not discriminate between us and them, for God cleansed their hearts by faith.”

Did you hear? Peter makes the statement, again, that God wants to enter into a relationship with each and every person. That means, each person in his time, in the first century, just as much as today, in the twenty-first century. God does not discriminate! And, neither should we.

What’s more, God cleanses everyone’s heart! Praise God, we don’t need to meticulously follow the Jewish Law code. We don’t have to wear special clothes, or observe special holidays, or have restricted food choices. God has cleansed each of our hearts, through faith! Peter goes on to say, “Now then, why do you try to test God by putting on the necks of Gentiles a yoke that neither we nor our ancestors have been able to bear? 11 No! We believe it is through the grace of our Lord Jesus that we are saved, just as they are.”

It was a little early in the formation of Christianity for the apostle Paul to formulate his theological statement in the letter to the Ephesians, some years down the road. But I can hear the beginnings of it being hammered out, right here. Paul’s triumphant words from Ephesians 2:8-9. “For by grace you have been saved through faith, and this is not your own doing; it is the gift of God—not the result of works, so that no one may boast.”

Suggestion: visit me at my daily blog for 2015: matterofprayer: A Year of Everyday Prayers. and my other blog,  A Year of Being Kind .  Thanks!