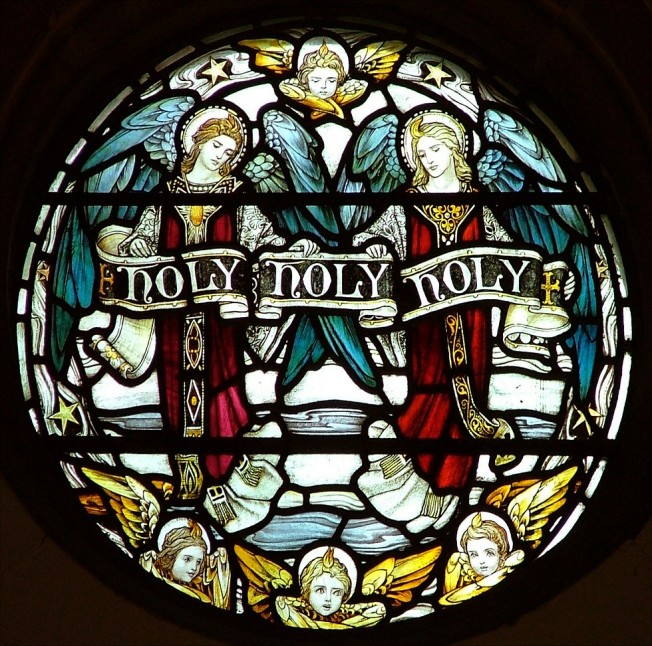 Today is Trinity Sunday. In the children’s message, we talked about a straightforward way of understanding the Trinity. The theological concept of the Trinity is an idea that has been and still is misunderstood—for centuries. Christians and non-Christians alike just plain do not understand it. Even knowledgeable ministers and bible scholars have problems talking about it clearly. That is one reason the children’s message about the concept of the Trinity was stated the way it was.

The simple idea behind the children’s message is an idea that can work for us adults, too.

Jesus said to approach Him as little children. He was talking to adults at that particular time. He meant that piece of advice to go for His disciples, His followers, and anyone else who was thinking about following Him. This can work in terms of the theological idea of the Trinity, as well. What’s a good way to talk or think about the Trinity?

One of my favorite commentators, Carolyn Brown, observes Trinity Sunday as one of her favorite Sundays of the year. She says: “It is God Sunday. The call is not to explain God but to celebrate God’s mysterious, more-than-we-can-ever-explain presence.  What could be better!” [1]

As we consider God’s unsearchable mystery and God’s awe-inspiring power and might, we all can look at God from a child’s point of view. We might even think about “the unanswerable questions people of all ages ask about God, such as but definitely not limited to:

Imagine a universe still and dark. Imagine a solar system just before it was going to spring into being, with nothing hung in space—yet. Imagine a place where the earth will orbit, but nothing there, yet. Except—the spirit of God—the Holy Spirit hovering, ready to hold the newly-born earth in loving embrace. Imagine the Word, the Logos, the creative force of God, speaking forth the whole of creation with astronomical power and might. Not only the earth, but also our solar system. Not only our solar system, but all other solar systems. And stars. And meteor showers. And quasars, and black holes, and everything else that is in the universe.

Traditionally speaking, God the Father, God the Son, and God the Holy Spirit had differently described roles in different expressions of the creation of the universe.

As we look more closely at both of these passages, Genesis 1 and John 1, we see God created the universe in the beginning. Genesis tells us that God spoke, and the world came into being. The Word, the Logos, the pre-Incarnate Son was the powerful Word spoken at the beginning of all things. And then, the Holy Spirit—or the spirit of God—described as moving over the surface of the waters, holding the earth secure. Can you begin to understand what a mind-blowing image that was?

We continue to get glimpses of this Triune God in our sermon passage for this morning, where the prophet Isaiah has a sweeping, magnificent vision of the heavenly Temple of God.

As Isaiah describes it with vivid word pictures, I think his vision sounds fearsome, and glorious, and terrifying. But, that’s not all! “3 And the angels were calling to one another:

‘Holy, holy, holy is the Lord Almighty; the whole earth is full of his glory.’ 4 At the sound of their voices the doorposts and thresholds shook and the temple was filled with smoke.”

This passage from Isaiah 6 contains important liturgical language:. Did you recognize that language? “Holy, Holy, Holy!” This is called “the Sanctus. The song is an acclamation from the congregation honoring the presence of the Lord. The minister celebrating communion has just said, “The Lord be with you… lift up your hearts… let us give thanks…” and then prayed a prayer of acknowledgment (the Preface) for what God has done in language that calls up the time of the church year.”

We find out more—in another way—about how great and mighty and powerful this God is, by looking at the Psalm passage from today’s lectionary.

Psalm 29 deals with the mighty powers of God in nature and in the crashing sounds, stunning displays and fearsome descriptions Eileen read to us.  “For the psalmist, the storm is a symbol not of the power of nature, but rather of the power and sovereignty of Israel’s God. Seven, the number of completeness, is significant [in this psalm]. Israel’s God is completely powerful and ultimately sovereign. There can be no competing claims.” [3] Just in case anyone was wondering, that is. God is the ultimate in power, majesty and glory.

In the New Testament, God the Word, God the Logos becomes incarnate; He is born and grows to adulthood as the son of Mary, Jesus the Messiah. Jesus the Anointed One, the Lamb of God chosen before the foundations of the earth, the Prince of Peace revealed to us in the Gospels of the New Testament.

Remember last week, when we celebrated Pentecost, the birthday of the Church? That was the expected coming of the Holy Spirit in each believer’s life, in great power and might. The Holy Spirit blew powerfully into the lives of the assembled persons praying. The Holy Spirit ignited their hearts and minds to go forth and tell others about the might and power of God, in raising Jesus from the dead with resurrection power, and saving us from our sins.

Is there any wonder that we are likely to fall on our knees as we sing the hymn “Holy, Holy, Holy?” As we consider the word holy the most special and important, set-apart, and awesome aspect of God. We reflect on the Trinity as we sing this hymn:

There are not enough superlatives to even begin to describe God. We do not have enough glorious, magnificent words fit to praise God. Our vocabulary falls far short.

Why don’t we consider the words of the heavenly beings in Isaiah 6, and close today with the words of the angels from Isaiah 6: “Holy, holy, holy is the Lord Almighty; the whole earth is full of God’s glory.”

Amen. Alleluia. Praise be to the Trinity, Eternal One in Three, Three in One.

(Suggestion: visit me at my regular blog for 2018: matterofprayer: A Year of Everyday Prayers. #PursuePEACE – and my other blog,  A Year of Being Kind . Thanks!)