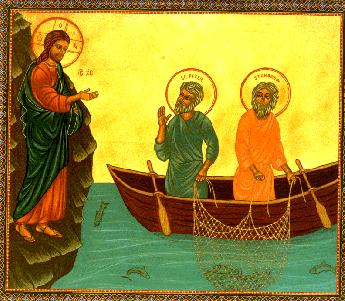 Is everyone here familiar with regular, ordinary work? Some people might call it common or mundane. The ordinary, everyday kinds of things that ordinary, everyday people do on a regular basis. That is what countless numbers of people do, every day, at work and at home.

That is what Peter, Andrew, James and John were doing, as fishermen. As the Gospel lesson today mentions, these men and their co-workers worked on their boat, doing hard work. Doing what they were used to doing every day. Probably, for some among them, doing the same ordinary, everyday things they had done on their boats for decades.

I suspect this day started out for Peter, Andrew, James and John like so many others. But, this day turned out differently, because Jesus showed up. Let’s see what happened from Matthew’s account: “As Jesus walked by the Sea of Galilee, he saw two brothers, Simon, who is called Peter, and Andrew his brother, casting a net into the sea—for they were fishermen.”

As one of the commentaries said, “Fishing was a popular trade on the Sea of Galilee. Fishing was the most common occupation for people residing in the small villages located on the lakeshore. Living on the shores of Lake Galilee with its abundant supply of fish, people understood fishing perhaps more than they did farming. Living on the shores of a fishing lake, the whole town was ‘into fishing.’” [1]

That troublemaking rabbi Jesus walks by the shore and calls out to them. He says, “19 Follow me, and I will make you fish for people.” What on earth does Jesus mean by that?

One of the writers I consulted, Dr. David Lose, helped to formulate a survey describing “work,” “vocation,” and “calling.” The survey asked respondents various questions about their work, how they viewed it, and how important work was in their lives.

“Where do [these] people find the greatest sense of fulfillment, meaning, and purpose (terms to which these survey respondents resonated far more strongly than “vocation” or “calling,” by the way)? Relationships. Even those who identified their work as a source of meaning and fulfillment usually cited their relationships at work as the places of particular significance.” [2]

These two guys in the boat? It’s their response that is really extraordinary. Our Gospel reading says: ” 20 Immediately they left their nets and followed Him.” Immediately! They don’t pause and think about it. Immediately, they go!

So now we have the rabbi Jesus, and Peter, and Andrew, walking along the shore. What happens next? “21 As Jesus went from there, He saw two other brothers, James son of Zebedee and his brother John, in the boat with their father Zebedee, mending their nets, and He called them. 22 Immediately they left the boat and their father, and followed him.”

The same thing. These two are sitting in their father’s fishing boat, and the rabbi Jesus calls to them. They get up in the middle of things, leaving the nets half-mended, and they leave.

What on earth is going on here? This reading is difficult to believe. It’s really a stretch of the imagination to think of getting up and leaving everyone and everything these guys know to follow Jesus. I don’t know whether I could do it! Don’t most people figure the disciples were extraordinary, first-century super heroes of the faith? You know. People that we can admire from afar but certainly not identify with.

Dr. Lose refers to some biblical scholars who suggest that “Jesus had been living in Capernaum for a while and had known Peter, Andrew, James, and John for some time, and so this call was neither sudden nor abrupt but was the natural outcome of their friendship. Maybe that was the case (huge emphasis on “maybe”), but given that Matthew reports that when Jesus comes and calls they immediately follow, I think we are meant to take notice.” [3]

Whether Jesus knew these four guys for a long time or for just a little while, Matthew tells us—he stresses they followed Jesus immediately. They didn’t think about it, they didn’t dither, or pause, or tell Him to come back tomorrow. No! They immediately followed and entered into a relationship with Jesus.

What were some things the New Testament tells us about this relationship with God? To bear each other’s burdens, care for each other (especially the vulnerable), and hold onto each other, through thick and thin. Striving to do this, we will always be upheld by God’s grace. [4]

Some people still don’t think they are worthwhile, or good enough to be real disciples. After all, I suspect we don’t have any super duper saints here in this church. No super heroes of the faith! Can God use me? Can God use you?  I know I am imperfect. I’m just a regular, ordinary person, going about my business, doing regular, ordinary things. I suspect that describes everyone here.

I have good news for us all, however. Jesus is still looking for people to come, to answer His call. He is calling to regular, ordinary people in regular, ordinary situations to rise up and become extraordinary.

Here’s an action step for you: find one person with whom you are in significant relationship. Perhaps it’s a relationship that brings you particular joy, or sorrow, or frustration, or hope. It doesn’t really matter, just so long as it’s significant. Once you have that person in mind, please take a moment to pray for that person every day for a week … and to believe that God is using you to make a difference in the life of the person for whom you are praying. [5]

Come back next week and let me know what happened. Did you feel closer to God? Did anything change for that person? We all can rejoice, for all of us strive to be faithful. Alleluia! Amen!

(A great big thanks to Dr. David Lose for his excellent words and thoughts on Matthew 4 and his bible study “Fishers of People.”)

(Suggestion: visit me at my regular blog for 2017: matterofprayer: A Year of Everyday Prayers. #PursuePEACE – and my other blog,  A Year of Being Kind . Thanks!)